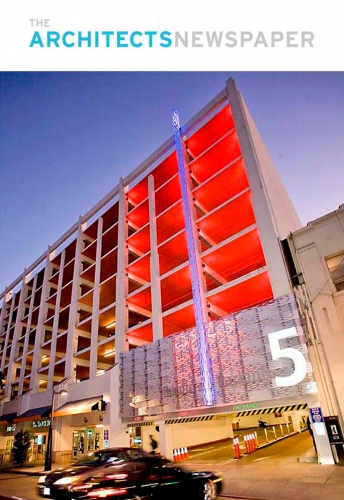 Two new garages by Brooks+Scarpa architects are not expensive or fancy or even architectural masterpieces. They are simply good improvements on a difficult building type. And they should be considered a model to cities building future utilitarian structures.

The garages, just outside the redesigned Santa Monica Place Mall in Downtown Santa Monica, were once covered with green steel mesh facades made by none other than Frank Gehry. But the buildings had fallen on hard times and needed an aesthetic and functional upgrade.

The firm’s main design move was the placement of large steel frames on the exterior, to which they attached multi-colored and multi-textured bars of cement board. The relatively easy and cheap process provides shade and privacy, while still allowing light to filter through. It also gives the structures, which Scarpa points out can often be “neighborhood killers,” a sense of rhythm, visual variety, and vibrancy, helping them become part of the urban fabric rather than a detriment to it.

Another important move was putting retail—enlivened with fold up garage doors—on the ground floor, so as not to deaden the street level. Now there is always foot traffic in front of the garages, and their brightly colored orange glass-enclosed exterior stairs even encourage people to (gasp) walk up to their cars. Eventually the firm hopes to install bike stations at ground level as well.

If you look around any city you’ll see that a popular strategy with most parking garages is to make them as simple and bare-bones as possible hoping they will blend in with blank walls. They don’t. They look worse. We need better design, but it doesn’t have to cost a fortune.

Of course building an architecturally-worthy garage can be a real challenge. Because they’re full of cars, garages need to be made of materials that can’t combust, and that generally means concrete. And since they have no program besides parking, there is usually no incentive for clients to push for any interior distinction. But parking garages need to contribute to the urban fabric, or, as Scarpa puts it, they will hurt it.

Besides these two garages, the firm also collaborated on four others in the vicinity—although their work on these was minimal, mostly repainting, improving facades and installing new lighting and parking management systems. All the garages are fronted with public art, including an array of hanging steel orbs by Ball Nogues, a colorful tile mural by Anne Marie Karlsen, and several water-like perforated metal screens by Cliff Garten.

The work on all six garages and their public art cost $3 million, said Scarpa. That’s probably less than one floor of Herzog & de Meuron’s garage in Miami.

Other new garages in LA have used equally uncomplicated means to create dynamic and useful spaces. John Friedman Alice Kimm Architects designed a wonderful, colorful steel mesh frontage for the LA Police Headquarters Garage in downtown Los Angeles. They’ve also put in space for ground level retail, although the city has yet to utilize this opportunity. And Moore Ruble Yudell, also in Santa Monica, created a fascinating composition on the exterior of the Santa Monica Convention Center’s parking lot using colorful channel glass. Unfortunately, that project does not have ground level retail, but it’s already become an icon for the city.

“Garages are finally considered part of the urban fabric,” said Scarpa, who noted that he wasn’t concerned with making the structures precious, just effective. And his model, he noted, can be “fabricated at a reasonable schedule,” meaning it can easily be replicated.

As Brooks+Scarpa demonstrate, the simplest solutions are often the best. 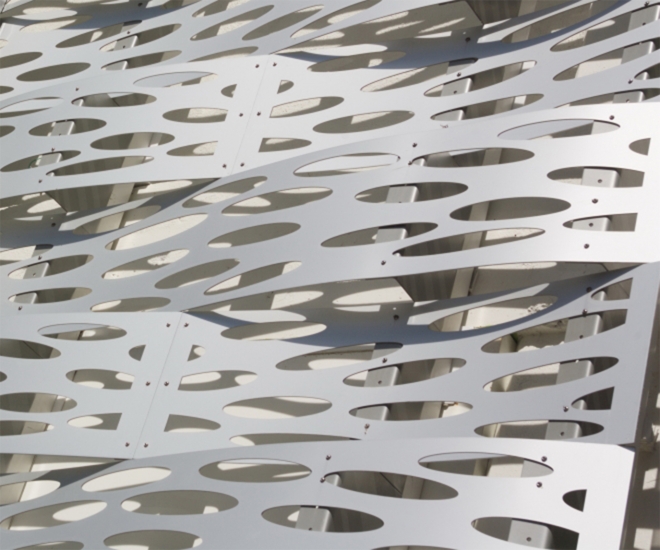