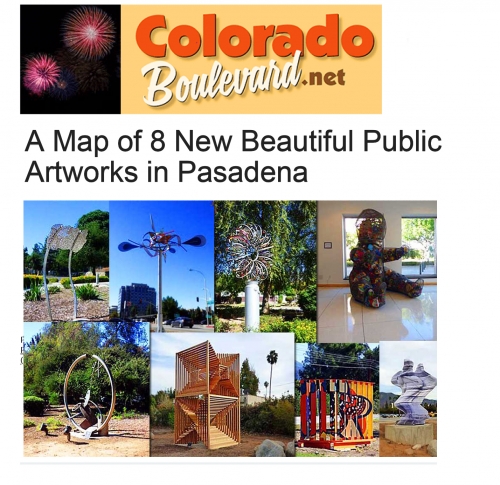 Eight new public artworks have been recently installed in town. They complete Phase III of the Rotating Public Art Exhibiting Program, which places art throughout the city for a three-year period of time.

Some of the chosen works are site-specific (the artists tailored them for given locations). Some are loans of pre-existent pieces, but in either case, the relationship between art and urban context is powerful.

Brochures of Phase I and Phase II can be found online. Phase III hasn’t yet been documented, but I didn’t resist mapping my own tour as soon as I could. I wished to appreciate each work at close distance, also getting a sense of the whole vision they compose when viewed as a continuous, flowing from one to the next.

My grand tour didn’t take a long time, still highlighting the diversity of microhabitats that our town contains—its quite intricate maze of natural, architectural and human landscapes. The art in view also covers a wide range of esthetics, inspiration, poetics. Such variety, of course, makes it interesting. Yet a comprehensive view reveals as well similarities, common threads and resonances.​

I have started my drive from the piece located farther South, on the West side of Lake at the intersection with Oakwood. I have parked just in front of the artwork.  ‘Mia Chan IV’, by Michael Todd, is an assemblage of different metals. Intersecting shapes inhabit a wide ring, open at the top—some of them more regular (crosses, cylinders, squares), others less so (twisted arcs, disks, or slabs). Geometry smoothly evolves towards the organic realm in seamless metamorphosis. Some surfaces are polished, smooth. Others are stained, corroded or splattered. The contrast of textures is riveting. Rust and verdigris add exciting color effects.

The large hoop with its internal geography obviously suggests a globe—a world of its own—but its openness evokes a frame. Maybe a mirror? Rather a portal. A lens, or an eye, through which we can see usual surroundings in unusual fashion. A driveway and a gate in the background, neatly enclosed by the metal ring, become mysterious and haunting. Doodles of green copper echo branches of a nearby oak tree—lines beautifully intersecting. The art engages the neighboring greenery in conversation… as a result, the sculpture itself comes alive. A sense of evolution is conveyed by the different stages of weathering of the metal—a suggestion of passing time, cycles, growth, renewal.​

Driving North on Lake, West on California, then North on Marengo, East on Green, I have arrived in front of the Convention Center, 300 E Green. Parking is available on Euclid—first street to the right. I enter the building through the door closest to Euclid Avenue. This is the only artwork placed inside, in the corner of the immense entrance hall. It is an impressive piece titled ‘Receptacle: The Other Toy Story’, by Joyce Dallal. A giant doll is made out of metal mesh, though the surface is such treated as to appear like plastic. This ten-feet-tall baby is filled with discarded toys. The message conveyed is hard to miss—a sensation of waste immediately invests the viewer. What a toy nobody can play with is for? What do discarded toys do besides crowding landfills? Dallal’s ‘Receptacle’ is a loan—it was previously exhibited elsewhere, and the artist’s intent has been clarified in past occasions. Yet it is mesmerizing to observe how it acquires here yet another meaning, unique to the context. As it sits in the desert hall it seems to merge in, as its outer structure recalls the metal rails dissecting the space, bordering a maze of staircases leading to lower floors. Both design and color perfectly match. The gray carpets laid on white marble tile are equally in tune. The toys are the only touch of color in an otherwise gray-scale ambient. But the color is caged. Therefore it exudes a strange irony and a sense of forlornness. The big baby looks lost within this cold expanse that it suddenly transforms in a sad nursery room, tainting it with a waft of loneliness, a slight inhuman tinge. Does the statement of oppressive multitude emanated by the piece reflect over the place? Does it hint perhaps to a kind of redundancy also applicable to the building? Kind of vacuity? The association might be totally unwanted, yet is unavoidable.

Driving South on Euclid, then East on Del Mar, ‘Basics # 25’ by Matthius Neumann is on the South side of the street, just before the intersection with Bonnie. I find parking on street. The piece is another large toy, beautiful and delicate: two superposed cubes are built with two-by-fours juxtaposed in various patterns. The effect is that of a model made out of matchsticks—or a log-cabin patchwork—or an origami of lumber, conveying levity and playfulness. But the piece also reminds of the internal structure of an unfinished house, therefore it carries a sense of potentiality. The exposed wood functions as a link between trees and homes, a connection between natural and built environment.​

Still East on Del Mar, North on Allen, East on Walnut. ‘And The Angel Wants To Go Back And Fix Things’, by Cliff Garten, stands where Foothill and Walnut split. Parking on street is available. Superposed slabs of fiberglass create the figure of an angel—head pensively tilted on one side, arms crossed in front, immense wings. Though, the shape is ambiguous and deceptive, as the overlapping of plates creates shifting shadows, reflections. The piece easily reads as an abstract pattern, but it also mimics the trees in the background. Even more, the nearby mountains of which it matches the colors, playing with dark and light shades of grey. Same is true for the clouds. What’s an angel anyway? Perhaps all of these forms, melting into each other.

Like the previous one, this piece stands on a neglected fragment of ground. There, the back of a bus station—here, the island separating two streets—none of them landscaped, both obvious recipients for trash. Then, both pieces interact with the context as punctuation marks. Hopefully they will bring attention to these overlooked corners, function as an invitation to rescue and repair them. The angel might have chosen this particular landing for a reason.

East on Walnut still, North East on Sierra Madre, I park just before the intersection with Sierra Madre Villa (to the South) and New York Drive (Northbound). ‘Calm a Little, Soul’, by Karen Reitzel, is situated on the island in the middle of this complex crossing, with the Eaton Canyon Golf Club just behind it. Here the grounds are manicured, verdant, shiny. The piece stands out against them because of its colors, inspired by the wings of an endangered butterfly. Sixteen metal posts, disposed in a U shape, form a niche—a shielded area, yet not entirely fenced—secret garden filtering the outside world but without obstructing it. As the title suggests, it’s a place of contemplation. The posts are painted yellow, orange, aqua, green, blue, white, black, reproducing the patterns of the insect’s wings in a shifting manner—as the gaps between posts cause the design to change when the viewer moves around them. The gaps also allow for the inside design to appear in between the outside pattern, making the visual experience more interesting—both continuous and fragmented.

In addition to its reference to endangered nature, this piece carries other resonances. A playground comes to mind, with a sense of joyfulness. The design can evoke graffiti as well—their energy and spontaneity.

A U turn on Sierra Madre, just East of the intersection, allows me to take New York Drive, North West bound. South on Altadena and then West on Washington, all the way to the intersection with Glen. ‘Solar Flower’ by Patricia Vader stands, again, in an island parting the intersection, close to a bus station. The area is neatly landscaped. Two palms grow near the artwork, which echoes their shape in a way. It is certainly aerial and light—a silvery pillar topped by a corolla built out of bicycle wheels—all of different sizes and colors, enlivened by their gaudy reflectors. Blades inserted in some of the wheels create weathervanes. Gently, they move in the wind. The effect of such assemblage of ‘re-cycled’ mechanic parts is surprisingly gracious. Lacey, it embroiders the air like a bunch of roses. It is festive like a firework, and yet unobtrusive.

This last is indeed a character of all the chosen artwork. None of it proposes itself as the center of attention. On the contrary, they all—in different ways—bring their context into focus. ‘Bird Cloud’ by Craig Stone is perhaps the most discrete, but is definitely worth a close look. I have gone South on Glen, East on Pepper, South again on Sunset until the intersection with Mountain. I have parked on street after the intersection. The piece stands on a green area in a corner. It is relatively small. Two curved rods are topped by a thin slab of metal that looks like a cloud, or else a tree canopy. In fact, the organic shape of the whole harmonizes, once again, with a nearby tree. But, as I near, I notice the fantastic detail of a flock of birds whose miniature silhouettes are connected in a large ensemble. Therefore, what the stems of metals have caught is a moment of flight, a dynamic gesture stilled in time. An impression of freedom, a dream.

To complete my loop I only need to proceed East on Mountain, then go South on Lake. The eighth and last piece of my tour is ‘Galactic Cluster’, by Adrian Litman. It peers among autumn colored trees on the strip of concrete dividing the center of the street—at the intersection with Maple, right before the 210 freeway. Parking is easy on Villa or on Maple. I like walking on the center divider, which is actually unpaved for the most part. Underfoot is a kind of soft mulch. The artwork matches the trees in size, but its tones are cooler and softer—grey, light yellow and blue. It resembles a semaphore, a lighthouse—a kind of welcoming emblem.  Overall it reminds of a windmill. A silvery metal pole is topped by an helix made of complex, disparate elements: oval blades reminiscent of insect wings—perhaps tears, perhaps drops of rain—thin tubular segments, ribbons of perforated metal mesh bent in beautiful curlicues. The top section in its whole is a weathervane, turning slowly in the wind.