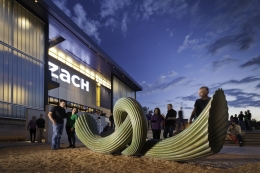 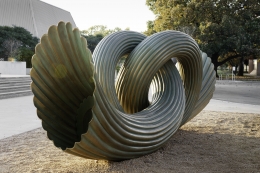 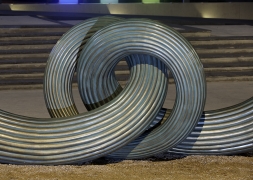 Cliff Garten’s artwork for Austin’s ZACH Theatre campus conceptually marries the use of the site (theatrical performance) and his innovative vision for a bronze sculpture celebrating performance through form and interactive sound. Rhytons is a knotted double horned bronze sculpture, inspired by a “rhyton”, an ancient horn-shaped drinking vessel for libations, not to be put down until emptied. The word rhyton derives from the Greek rhein, “to flow”. The sculpture’s form flows in a continuous line that doubles back upon itself to become a knot, leaving each end open. By knotting the archetypal form of the horn, there is the physical gesture of coupling which references the body and the coupling of sculpture and performance, resolving itself through the viewer’s interaction with the sculptures sound.

Two feet into each opening, a perforated bronze screen conceals a motion sensor connected to the master sound system in the building. Each sensor notes the presence of a viewer/listener then triggers the sculpture to perform the artist’s sound work, music or dialogue programmed to relate to current productions at the theatre. As one circle the sculpture, a dialogue ensues between the two horns. Cliff’s inaugural sound work was a treatise on the nature of theater based upon Shakespeare’s Seven Ages of Man, titled Ages, using the talents of Austin’s best-known actors to give voice to the piece. The dialogue creates a dance between the sculpture and the viewer. To further integrate the artwork to the site, the sculpture and the adjacent architecture may be programmed to be in dialogue with each other. Cliff collaborated with the theater’s Artistic Director so that programmable sound components in the theater balcony could become a collaborative performance with the sculpture. Rhytons has become a deeply engaging part of the experience of attending the theater in Austin. 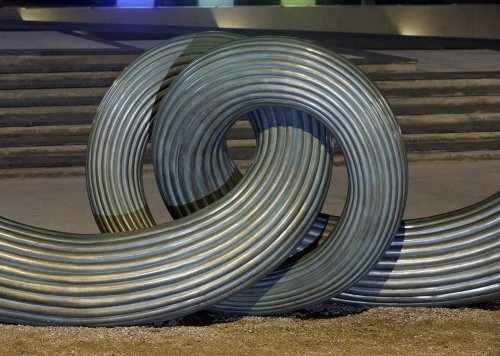 Commissioned by
The City of Austin 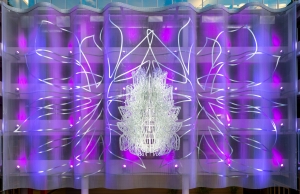 Cliff Garten demands more from the future. Always on the move, the veteran sculptor, based in L.A. by way of New Jersey, has several projects currently in the works to not only stack his profile but also progress the art world and technological innovation. 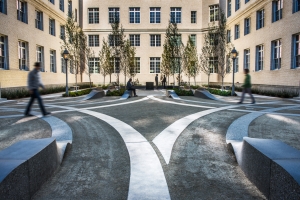