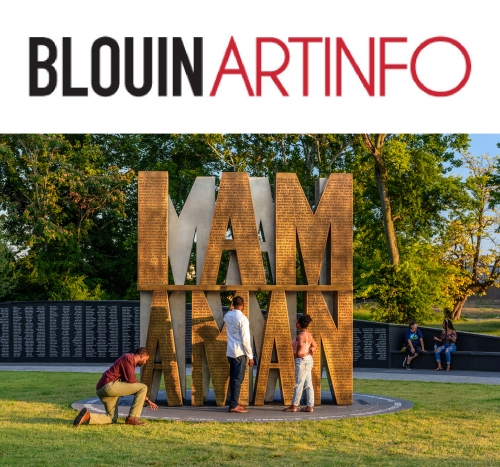 Memphis Mayor Jim Strickland formally opened “I AM A MAN” Plaza in Memphis on April 5, 2018, honoring the city’s sanitation workers and Martin Luther King Jr. The opening of the plaza comes exactly 50 years to the day after a march with Dr. King and the sanitation workers were originally scheduled.

The plaza, funded by the City of Memphis and the Plough Foundation and developed in partnership with the UrbanArt Commission, is designed by Cliff Garten Studios in partnership with JPA, Inc. Sculpture, text, and landscape come together to form an important new American Civil Rights Memorial.

“I AM A MAN” Plaza is a large-scale experiential public sculpture commissioned to pay tribute to the members of the pivotal 1968 Sanitation Workers’ Strike and the legacy of Dr. Martin Luther King, Jr. A focal point of the Civil Rights Movement, the strike brought Dr. King to Memphis, Tennessee, where he was assassinated.

The strike and its “I Am a Man!” slogan came to represent the struggle of the working poor and racial inequality in Memphis and beyond. The project was chosen out of a nationwide competition of 80 artists.

“I AM A MAN” Plaza is located adjacent to Clayborn Temple (280 Hernando Street), which served as a home for sanitation workers during the 1968 strike. The landscape sculpture designed by Garten features a centrally located bronze and stainless steel sculpture that brings the iconic slogan “I AM A MAN” into the present, as an interactive sculpture that is illuminated at night. Garten and his studio led a design team with Memphis-based landscape architect John Jackson of JPA, Inc. for the memorial plaza. As part of Garten’s plan, spoken word artist Steve Fox held an open dialogue with the greater Memphis community, who through a series of public workshops organized by the UrbanArt Commission, selected pertinent historical text and created an original contemporary text which is etched into the marble gates to the plaza’s entry. The texts combine as a meditation on America’s struggle and progress with racism and class inequity since the sanitation workers and Dr. Martin Luther King took their historic stand in Memphis. The plaza has been unveiled to the public on April 5, 2018, at 294 Hernando St, Memphis, TN 38126, USA. 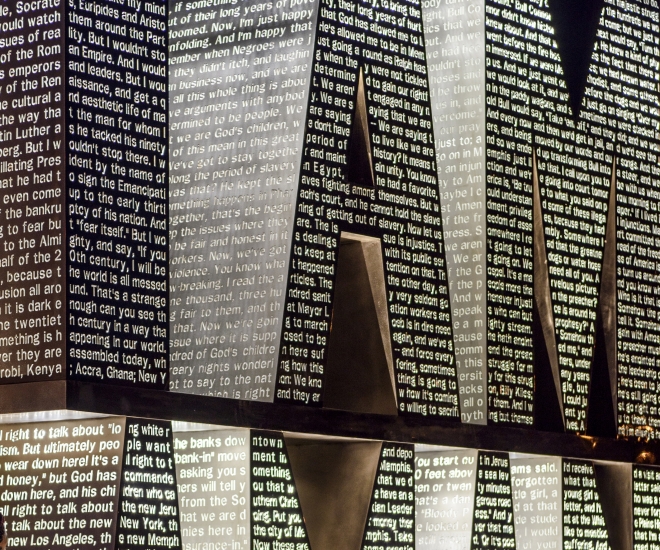