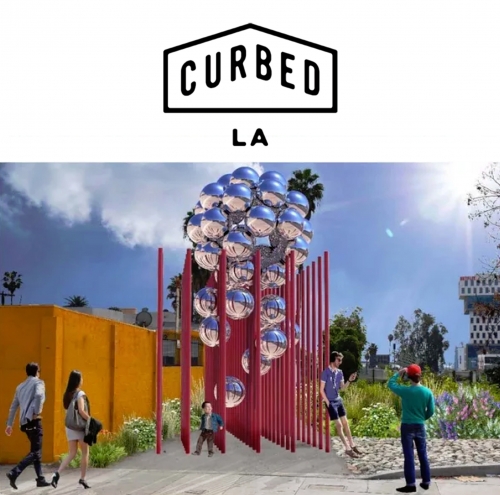 Five finalists have been announced for a new public art project that’s being called the official gateway to Little Armenia.

The permanent installation is intended to acknowledge the cultural diversity and heritage of the Armenian population of Los Angeles—one of the nation’s largest—and serve as a nod to the contributions the Armenian community has made to the city of LA.

“We are on track to create a cultural landmark that will serve as a point of pride for the Little Armenia community,” said Los Angeles City Councilmember Mitch O’Farrell.

The artwork will go up on a little patch of land where Hollywood Boulevard and Van Ness Avenue meet, right next to the 101 Freeway.

Proposed art pieces from the five finalist are below, but the designs will also be on display for a final review at a community meeting from 10 a.m. to noon Saturday, March 25 at the Hollywood Banquet Hall at 5214 Sunset Boulevard.

Artists Vladimir Atanian, Gor Atanian, and Armen Kazanchyan’s piece will incorporate the “darpas” (gateway) and the “karas” (amphora) as reflections of Armenian culture and community. The piece will feature handmade tiles and red limestone.

The Western Gate to the City of…

Artist Ilan Averbuch’s steel and granite sculptural installation is intended to mimic “a gateway from the fortified walls of an ancient Armenian city.”

Cliff Garten, whose “Lotus” sits at Vermont and Wilshire, evokes community and shared experience with his pomegranate-inspired stainless steel piece.

To be is to belong: There is only the Earth…

Narineh Mirzaeian & Heather Roberge employ aluminum panels and carved tuff stone to draw on the theme of belonging. Their piece extends “a promise of belonging” not just to Armenians, but to all Angelenos.