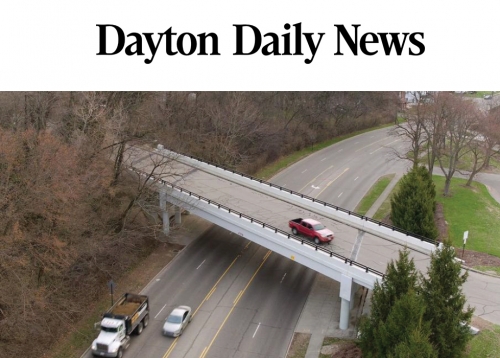 Kettering is planning for the replacement of a Ridgeway Road bridge that will include a public art component.

The nearly 54-year-old Ridgeway Road bridge is in need of replacement due to wear and tear over the years, according to the city. The bridge crosses Dorothy Lane between Far Hills Avenue and Southern Boulevard.

Traffic count numbers from May 2017 indicate about 900 vehicles cross the Ridgeway Road Bridge each day.

The Ohio Department of Transportation will fund 95 percent of the construction cost, up to $2 million.

The city began pursuing grant funding for the reconstruction of the Ridgeway bridge in late 2017. More than 70 percent of respondents to a survey about the bridge indicated that they wanted the bridge replaced for all modes of traffic.

Kettering Assistant City Manager Steve Bergstresser told residents at a public forum this week that the current estimated cost to replace the bridge, including engineering design and right-of-way costs, is $2,675,000. The public art component of the project has been budgeted at $350,000, for a total estimated project cost of $3,025,000.

He added that construction is currently scheduled to begin in late 2020 or early 2021, when the municipal bridge funds are available from ODOT.

The project will require the temporary closure of Ridgeway Road over West Dorothy lane, including the Ridgeway Road and Wayside Court intersection during construction.

Bergstresser said there will also be some vegetation cleared out on the north side of the bridge during the project and various lane restrictions in effect as well.

Division Manager of Cultural Arts Shayna McConville told residents at the forum that California-based Cliff Garten Studio was selected to create the permanent design for the public art component for the project.

The artwork design will be finalized this summer according to McConnville, who told residents that CitySites and city officials want feedback from stakeholders and residents to make sure that the artwork is impactful and what people want.

“We also talked to other public art managers that have done bridge projects across the country,” she said, in order to get an idea of what has worked and not worked design-wise and in a fiscal sense. “We came to the conclusion that Cliff Garten Studio was the artist we wanted to work with.”

McConnville said that the idea is to have this be a lasting, permanent project going out more than 75 years, so the city was fortunate to find an artist studio with international acclaim to take on the project.

Kettering is spending $350,000 for a public art installation as part of reconstruction of the Schantz Avenue bridge. Vicki Scuri of Lake Forest Park, Wash. earned the selection as the artist from 94 artist submissions from around the world.

The city has set a date of May 10, in order to get feedback or to field questions regarding the Ridgeway project, and if there are any concerns regarding how the project will affect historic properties.