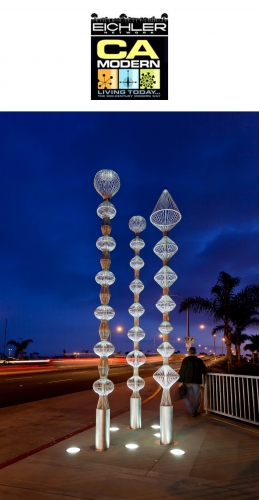 Pods Glistening in the Night

Long Beach, a city of many aesthetic wonders both natural and man-made, got another recently—something that seems a little of both.

‘Sea Spires,’ a trio of 16-foot-tall stainless steel towers illuminated at night by LED lights, appear at first to be alive. Their curvaceous pods suggest glistening sea creatures. Or perhaps they’re humanoids? They are “guardian-like,” the artist, Cliff Garten has suggested.

The sculpture, commissioned by Long Beach Transit with the Arts Council of Long Beach, can be viewed near the marina at the corner of East Second Street and East Marina Drive.

‘Sea Spires,’ was inspired, like all of his work, Garten said in a recent interview, by “the site and what I’m working on at that particular time. Long Beach caught me in the middle of a series of stainless steel rods arranged around a volume that can be illuminated.”

Garten, whose studio is in Venice, has emerged as one of the more successful and ambitious designers of public artworks.

In the Bay Area, people can see his work at Walnut Creek’s Veterans Memorial Plaza, and in Sunnyvale’s ‘Moffet Towers,’ where he created a landscape of berms, grasses, and granite towers.

In Southern California, among other projects, Garten is responsible for ‘Sentient Beings,’ a grouping of towering quasi-humanoids in North Hollywood that may have arrived from the same aquatic planet as ‘Sea Spires.’

Garten also has work in Sacramento, including ‘Mad Hatter’ at the Valley Hi-North Laguna Library, and ‘California Song,’ a pocket park at the Capitol Area East End Complex.

Garten, unusual for a practicing artist, has a masters degrees in both sculpture (Rhode Island School of Design) and landscape architecture (Harvard), and his four-person office includes a designer with a degree in architecture.

He has provided art for light-rail lines in Los Angeles, Phoenix, St. Louis, and Minneapolis; and has worked on projects in Arlington, Virginia (the ‘Corridor of Light’), and Fort Worth, Texas (the ‘Avenue of Light’) that use landscape design and art to help remake entire neighborhoods.

‘Corridor of Light,’ Garten’s largest project to date, which includes artwork on a thoroughfare and two bridges, plus lighting, benches, and bike racks, suggests a positive trend in public art—a holistic approach that addresses the overall landscape and blurs distinctions between art, landscape architecture—and even architecture. “Boundaries are more fuzzy than they ever have been,” he says.

Like many designers throughout history, Garten is a bit of a utopian. He believes art and good design can help remake cities in a positive way, and fulminates against public works practices that aim at cost-savings above all else and eliminate joy from the landscape. “This culture,” he says, “does not value the public realm.”

Clearly, Garten is an artist to watch. Upcoming projects include ‘Dubliner,’ which will debut near the Dublin BART station early next year and a few months later, ‘Ethereal Bodies 8,’ at the new wing of San Francisco General Hospital; and ‘Ribbons,’ an arrangement of undulating courtyard seating, at 50 UN Plaza in San Francisco. 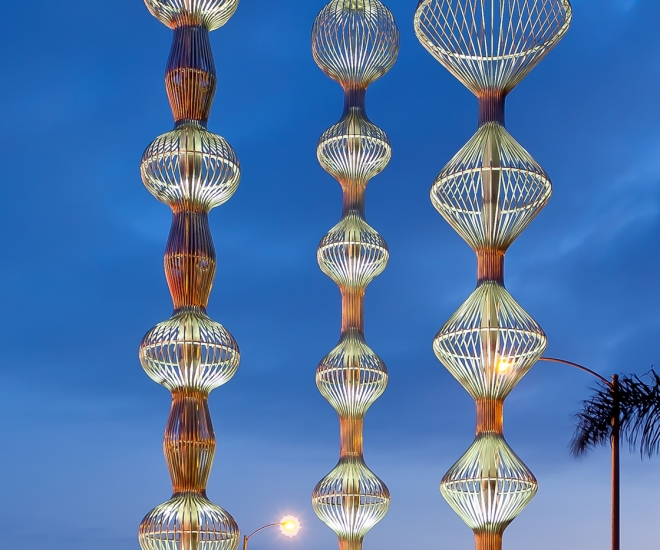