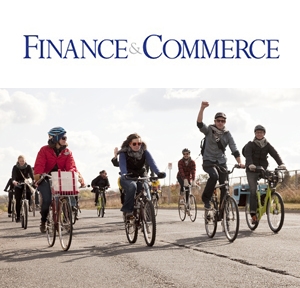 Consultants brainstorm on bringing customers back to Central Corridor

Riding to the beat of 1970s funk played on a rack-mounted boombox, a dozen bicyclists tooling through St. Paul and Minneapolis neighborhoods Sunday morning seemed an unlikely focus group for planning for life after light rail construction.

Even the ride leaders — consultants hired by Public Art St. Paul to help write the Central Corridor public art plan — acknowledge that their methods are unproven. But when it comes to bringing people back to businesses and neighborhoods suffering through four years of track, station and road construction, the solutions may depend more on art than science.

“It’s a little hard to say what this process does immediately,” said Blaine Merker, an art consultant with San Francisco-based Rebar Group who served as a guide on the Central Corridor Roadside Attraction Bike Tour over the weekend. “The role of the public artist in the planning process is asking the ridiculous question.”

The two-day, four-part tour of 11 miles of neighborhoods surrounding the Central Corridor line is part of an 18-month consulting and public-involvement effort expected to fold the public art plan into comprehensive planning documents in Minneapolis and St. Paul. The plan, funded by a grant from the Central Corridor Funders Collaborative and budgeted at $150,000, is intended to get local artists working and talking along the corridor.

What the public will see could include installing native prairie gardens in Howell Park, hiring an artist-in-residence for the Central Corridor and artisans locating their studios in these neighborhoods. These activities, said the consultants, riders and guest speakers on the tour route, will draw visitors and income into the Central Corridor in the coming years.

“I think artists have always been economic generators,” said Mason Riddle, a Sunday morning tour rider and St. Paul resident. “They seem to find themselves in transitional neighborhoods.”

The public art plan has little to do with art installations already planned for the 15 Central Corridor light rail stations. Christine Podas-Larson, president of Public Art St. Paul, said the plan isn’t really about the rail line itself.

“We want to convey the wholeness of the surrounding neighborhoods,” she said. “We are concerned about the long term.”

Results wanted, quantifiable or not

Getting people living in, working in and visiting Central Corridor neighborhoods to enjoy the area was the theme for the weekend bike tour. Riders made a dozen stops along the way to learn about art and ecology from experts recruited for the event.

At the Health East Midway Clinic in St. Paul, Christine Baeumler, the Capitol Region and Ramsey Metropolitan Watershed District artist-in-residence, combined the two subjects. She proposes periodic art installations in and around the University Avenue rain gardens planted to stop sediment and phosphorous from flowing into the Mississippi River.

“I see these as little storm water education outposts,” said Baeumler, an art professor at the University of Minnesota.

Whether these outposts or an art-inspired commercial growth spurt will draw traffic and income to the area is impossible to know. Mel Gray, a professor of economics at the Opus College of Business at the University of St. Thomas, said no reliable study of the economic effect of public art has ever been produced.

While he thinks public art efforts can redirect traffic to a particular area, it will come at a cost to other areas.

Christine Baeumler, an art professor at the University of Minnesota, described the function and structure of a “tree trench” and storm water planters that will be built into the Central Corridor light rail project. (Photo: Matt M. Johnson)

“When people come to see a linear neighborhood like the Central Corridor, that’s not a bad thing,” Gray said. “But we have to keep in mind that they’re choosing to not do something else.”

Gray said it is rare for an area-specific arts effort to rise above the profile of a major public project like the Central Corridor light rail line. He said a unique example of this happening is the Guggenheim Museum in Bilbao, Spain, which put an otherwise unremarkable city on the world tourism map. The challenge in the Central Corridor, he said, is to make the art more of a destination than the train stations.

“The transportation mechanism is going to be so much bigger, the art is going to get swamped,” he said.

The consultants working on the art plan are nonetheless putting study and thought into what they will report back to Public Art St. Paul. Todd Bressi, an urban designer who is part of the art plan team, planned to continue the weekend’s public engagement effort this week by interviewing Central Corridor business people and residents about their perceptions of an art-based economy.

He’s going into the interviews with no preconceived notions.

“None of that is really well known,” Bressi said.

The consulting team will deliver a report of its findings to Public Art St. Paul.

Consultants working on the Central Corridor public art plan are: