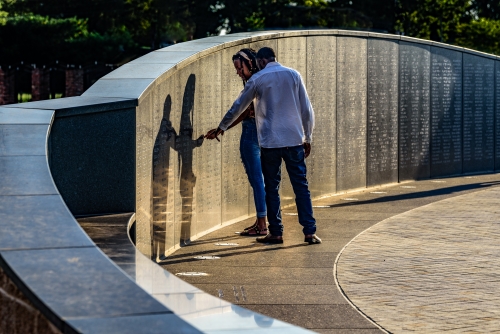 MLK50: I AM A MAN PLAZA Is A Trip Through The Soul Of This City

MEMPHIS, Tenn. (localmemphis.com) - People stare at the words.
I AM A MAN.
Just like they did 50 years ago.
They are words you can feel, words that shake this city's soul.
They are what drove men to demand to be treated with dignity and respect, and that's why there is now an I AM A MAN plaza.

Sculptor/designer Cliff Garten of Los Angeles says, "I think it’s beautiful. It brings the history of the sanitation workers strike back to this place, Clayborn Temple, where it began."

Simplicity makes it stand out.
There are famous quotes from Civil Rights leaders on one side.
On the other side are the names of every single sanitation worker who went on strike in 1968.
The only way to describe the feel you get here is, it is Memphis.
Garten admits it. "One of the things," he says he does "... is I come to a place and feel the energy of the place, and then respond to it with the sculpture, but it makes a play for the people who live here."

Tourists will come and take pictures.
People who live in this city will come to find names, to think about men who fought for decency at a time when this city thought they were less than human because of the color of their skin.

"My uncle used to work for the sanitation department," says June Newsome of Memphis. "His name is Edward Newsome. He's retired now."

We found Terrance Nickelberry of Memphis searching for his father's name, Elmore Nickelberry, who still works for the Memphis Sanitation Department.
He liked what he saw, said it should have been done years ago, looking at the wall of names. "From all the members you see and what he's done here, you can't ask for anything better."

Watching all of this was Memphis Chief Communications Officer Ursula Madden. She has been working on this project for two years, and the finished product was getting to her. "It is an emotional place," she said. "I don't think you could have any kind of connection to Memphis and not feel this place in your heart."

As people walked by and took pictures, Madden said " It's been a long journey. But this is a magnificent tribute to the '68 sanitation workers."

Copyright 2019 Nexstar Broadcasting, Inc. All rights reserved. This material may not be published, broadcast, rewritten, or redistributed.