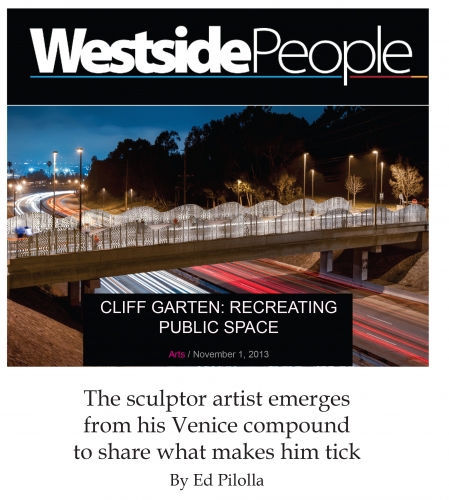 Thousands walk past, but few may notice on the freeway overpasses, downtown city streets, train stations and bus stops across America. The artwork of Cliff Garten is ingrained in the modern landscape.

Garten designs public art, or large-scale art in public places. He is known as an installation artist, but he simply calls himself an artist. He thinks the term public art is somewhat demeaning. He prefers civic art and Garten’s been making it around the world for the past 13 years.

He said he wants to change the way American infrastructure is built so that the design draws attention to the resources we use and even educates the public as to why those resources are precious.

“But we don’t do that,” said Garten. “We build it in a base and mean fashion. I mean, I’m not saying engineers haven’t done a good job of solving our problems. They’ve done a very good job with our needs but not our desires.”

Public art wasn’t really recognized as an artistic field until the last couple decades while the National Endowment for the Arts paved the way. Plenty of civic art projects across the country remain delayed because of budget cutbacks, but enough are funded at one-half to two-percent of the overall. In some cases, cities even require it.

Garten left a tenured teaching job at a Midwest college but left to make civic art and moved west where he felt the social and cultural conditions are more open. Since then Cliff Garten Studio has completed more than 40 public sculptures, including pieces at civic centers, hospitals and light rail stations.

He and wife Molly Reid along with their young daughter live in what Garten calls their compound on Preston Way in Venice. Dense foliage and hedges surround a house and a large, two-story studio in the back next to the alley where deliveries come and go. Reid, an architect, designed the family home and studio.

“The time was about turning inward, establishing a family, building my work in public and creating a business,” Garten said. “I like this compound… Life opens on the inside.”

Garten grew up in three different states on the East Coast before studying sculpture at Rhode Island School of Design. He earned his masters in landscape architecture from Harvard. Civic art is what Garten is known for, but he produces personal, studio art. Two of his sculptures are currently on view in the exhibition called Tapping the Third Realm on display in the Ben Maltz Gallery at Otis College of Art and Design through Dec. 8.

Meg Linton, the director of galleries and exhibitions at the Ben Maltz Gallery at Otis, believes that Garten’s time creating public art has broadened the appeal of his studio art.

“I think it’s really interesting that he was originally trained as a sculptor and became a landscape architect and designer,” Linton said. “And now that he’s cycling back to making his own personal work, there’s a real level of sophistication because he’s had so much interaction with the general public. His sculptures are really accessible and challenging at the same time. He’s been able to make the bridge. He actually considers his audience, which is really wonderful.”

While making the transition from tenured Midwest professor to Los Angeles artist, Garten left the gallery and museum world because he wanted his work to be seen by more people and it could be touched. Within the last two years he returned to his personal studio work where he says, “it doesn’t have to do with serving anybody.”

That’s in contrast to the public art pieces, which are often finished only after compromising with oversight agencies and technical realities. The fact is Garten enjoys operating dual artistic practices, including running a business.

Garten got his start mastering ceramics. He said he creates all the time in his head, and if the image sticks in his head he’ll work it out. He works closely with architects, landscape engineers and construction crews because he has an idea how the process and material will unfold. Over the past six years, large-scale sculptures with more detailed lighting have become a more frequent part of his work. As a result, he has become his own lighting designer.

Since these pieces must be seen, lighting is everything. In North Hollywood outside the Art Institute of California, Garten’s Sentient Beings sculptures capture the sunlight in the day and change colors with LED lighting throughout the night. In Koreatown in April, Garten will unveil his largest project in Los Angeles, a 45 by 70 feet long screen and sculpture titled Los Angeles Opens Its Heart of Compassion at a large residential and commercial project on Wilshire. At the center will rest a sculpture inspired by the Lotus flower, a strong symbol in Korean culture.

Outside a community theater in Texas, Garten designed a sculpture called Rhytons inspired from a drinking horn. When somebody walks around it an audio feed from inside the theater trips, encouraging people to move around it. This month in Calgary, Alberta, he is completing artwork for two gateway light rail stations in the downtown area. The stations have a series of eight 30-foot tall sculptures that change colors when trains arrive, dock and depart. Garten said he delights in the idea that his sculptures can perform as part of the infrastructure that runs the city.

In Arlington, Garten is currently working on a “Corridor of Light” to mark a main entrance to Arlington County by metro with a procession of sculptures that light up next to the Marine Corp. Memorial, otherwise known as the Iwo Jima Memorial. Garten needs to satisfy federal and county overseers as well as other advisory panels.

“Solving an urban design problem is what Cliff does uniquely well,” Adams said.

The first step in creating public, or civic art is visiting the location. The sculpture grows out of consideration for what’s going on at the site, Garten said. The Ken Hahn Bridge at the entry of the Baldwin Hills Conservancy was designed to have reptile skin to represent life in the nearby ecosystem. Thousands of drivers on La Cinema see it every day.

“Very simply what I do is I go to a place where somebody wants to commission me to work and I decide if I can work there or not,” Garten said. “Some places don’t have the right energy, they don’t have the right budget or the right conditions. And If I say yes, then what I do very simply is I gather energy on the site, and coalesce it into the presence of these sculptures that then re-condition the way the people experience the place. If there’s nothing there I find inspiring, I just don’t do it. Most places, given the right amount of attention, and attention generally translates into money, have something.”

Studio work is another story, and process. In Garten’s studio inside his family compound, photos of his many public art projects flank a long table. On the opposite wall hangs his personal work. A termite is made of wood chips near a snack of wood made of cast iron. A snail is made of hard silver material and the shell is visibly soft. The bee is made of wax with red polka-dotted fur. They are beautiful objects meant to engage the audience in a simple question of what nature is changing into because of human beings.

“Here what I’m able to do is draw you in and make this really sinister comment, and I’m able to work with different materials the way I want in a delicate way,” Garten said. “I’m offering one little pinhead of resistance in this whole public realm that’s built according to the bottom dollar, and I’m making a place that holds people in an interesting way. It’s simple.” 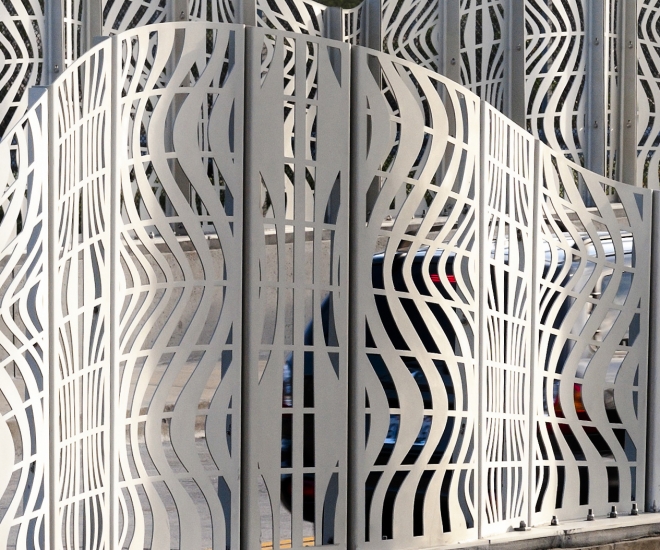