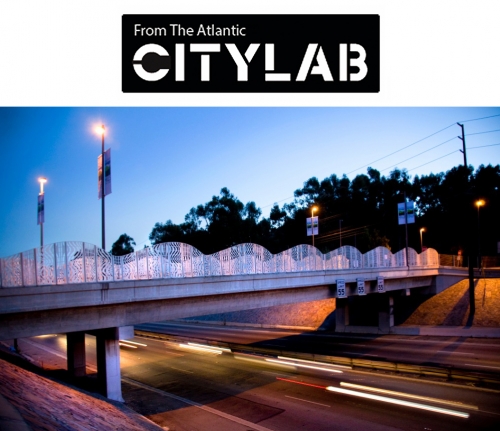 One Day Soon L.A. May Be Known for the Beauty of Its Bridges

A new crop of high-design bridge replacements has L.A. poised to remake its image.

About a century ago, Los Angeles undertook a massive infrastructure project, building 14 historic bridges spanning the L.A. River. Completed between 1909 and 1938, under the supervision of city engineer Merrill Butler, the reinforced concrete arch spans were architectural marvels. The bridges were examples of the nationwide City Beautiful movement, which hoped injecting cities with monumental grandeur would also create civic virtue among residents.

Unfortunately, these bridges have long since suffered the ignominy of spanning mostly barren stretches of a concrete viaduct. They’re better known as the dystopian backdrop to car chases and gang fights in movies like Grease and Terminator 2 than as majestic engineering feats. As Los Angeles undertook massive freeway expansion in the latter half of the last century, aesthetics were sacrificed for efficiency when the car ascended as the primary mode of transportation.

Yet there is a shift occurring in Los Angeles today, one indicative of a larger trend towards multi-modal transit with a renewed emphasis on beauty. These bridges aren’t embracing decorative elegance for their own sake; they’re also serving a wider swath of the public, including bicyclists, pedestrians and trains. “We’ve completely changed the way we view these infrastructure projects in just the last five years,” says Nat Gale, manager in the Mayor’s Office of Transportation. Gale credits a loose coalition of community activists, bicyclists and politicians for the rapid change. “It’s taken the advocacy community rallying to show elected officials how it important it was to them,” says Gale. “There was pent up demand.”

L.A.’s most iconic river bridge, the Sixth Street Viaduct, is suffering from a degenerative "concrete cancer" that affects the structural integrity of the bridge, putting it at risk of collapse during an earthquake. It will be demolished to make way for a new span to be completed by 2019. The final proposal chosen by the city after an international design competition, by HNTB, Michael Maltzan Architecture, and AC Martin Partners reveals how the city’s self-image is itself transforming.

The proposed design seeks to create a new icon for downtown L.A.. "There are echoes of Merrill Butler" in the repeated series of concrete arches, explains HNTB’s chief bridge engineer Ted Zoli. The renderings include direct access to the river, park space, and pathways for cyclists and pedestrians. "We’re trying to change the hierarchy of automobiles first," says Zoli.

The Sixth Street bridge will join several other recently built bridges in L.A. that abandon the ruthless efficiency of "value engineering" in order to push the design envelope. This past December, construction was finally completed on what’s already known as the "basket bridge," a 584 foot-long concrete bridge for the Gold Line Foothills Extension train. The bridge spans the 210 freeway and was conceived by Andrew Leicester, an artist known for his public projects. The curvilinear basket design is meant to honor the original inhabitants of the San Gabriel Valley, the Native Americans who once traveled those same foothills.

The gateway to Baldwin Hills Parklands also has a new bridge, with sculptural panels designed by artist Cliff Garten. The perforated pattern reinterprets the native landscape surrounding the bridge.

The Gold Line "basket bridge" on the 210 Freeway near Arcadia. (Courtesy Metro LA)

Politicians and designers alike hope these bridges will be more than simple passage from one location to another; that these bridges will help propel Los Angeles infrastructure to a future that embraces bicyclists, walkers, and transit riders, and does so with style. "They’re not just concrete slabs. They can and should be amenities to the community - economic, physical and aesthetic," argues Maltzan. "Good design happens because there are people invested in the design."